Few people would accuse me of being smart, but I can’t believe I’m the only person to be confused by all the orange liqueurs at my local ABC (see, I’m acclimating to the South).  So today we’ll set the record straight. 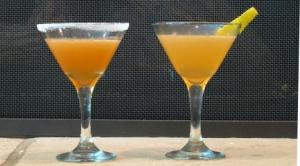 Nearly all orange liqueurs are derivative of Curacao (pronounced Kura-SOW), which is named after the Caribbean island of its origin.  It’s made by soaking the dried peels of the lahara citrus in grain alcohol for several days.  Voila.

The lahara is similar to an orange, so naturally when it became popular and production grew oranges were used to meet demand.  Ergo, Triple Sec.  Today the terms Curacao and Triple Sec are often used interchangeably.  Depending on where you are in the country, you’ll see one or the other (or both) on store shelves.  In North Carolina, all clear Curacaos are labeled Triple Sec and only the blue liquid is labeled Curacao.  BTW, the tint does nothing to the taste — it just adds tropical coloring to your tiki bar.  Unless you have a deep burning desire to make blue drinks you do not need to stock both at home.  I don’t.

There are two brands/types of triple sec that are unique and important here — Cointreau and Grand Marnier.  Both are french triple sec brands, both are 80 proof, and both are specifically called for in some famous recipes.  While Cointreau is a pretty standard (if high-proof and high-quality) triple sec, Grand Marnier is a little unique as it is made with cognac instead of grain alcohol.

BTW, none of these are to be confused with Orangecello, which is whole orange slices and some sugar soaked in grain alcohol (the orange version of limoncello).  The taste is similar but distinct from the Triple Secs and cannot be used interchangeably in most recipes.  Paula’s Texas Orange is probably my favorite orangecello and there’s a ton you can do with it.  But that’s another post.

Confused yet?  It gets better…my local ABC has 16 different bottles in the orange liqueurs section.  Twelve of them are labeled triple sec and of those there are 4 different proof levels (30, 42, 48, and 60).  Even within those groupings there are vastly different tastes.  So now of course you’re asking yourself, “Which one(s) should I have in my bar?”

I have a simple solution for this problem.  Just stock 2 — Cointreau and Grand Marnier.  Here’s why: there are some recipes that will call these by name, so if you’re going to have a bar you’ll need them anyway.  Besides, they will work better than most any standard triple sec in any recipe.  If the higher proof is a problem, simply cut the amount by 25% or add a little extra sugar.  Experiment – it’s fun.

Last note: there is one ‘knock-off’ orange liqueur that I use.  Patron makes one called Citronge.  Like Cointreau it is also 80 proof, and the taste is very similar (indistinguishable in a cocktail). Since it is a third less expensive than Cointreau, I use Citronge almost exclusively in my bar.

What to make with triple sec?  We’ve already described a few in this blog, and we’ll certainly talk about many more.  Today, though, we’re going to talk about the Sidecar.  This is one of the very first sweet and sour cocktails, developed in the 1930’s and can serve as the base recipe for almost all sours including Margaritas, Lemon Drops (vodka sours), and Cosmopolitans.

There are a couple of schools of thought on Sidecars – French and British.  The French like equal parts brandy, Cointreau, and lemon juice.  The British like a lot more brandy.  David Embury (British) lists the sidecar as one of the 5 basic cocktails and insists that an 8:2:1 ration is perfect (that’s 2 oz brandy, 1/2 oz Cointreau, and 1/4 oz lemon juice).  While I like this version a lot, it is not exactly accessible (it’s strong as fuck).

At right I split the difference.  Slightly more than equal parts brandy gives the drink a lot more character, but the ratios above ensure that it appeals to a wide range of palates.  I suggest you start here and move the brandy to 2 oz and see if you like it.  Note that the classic recipe calls for no sugar in the drink, frosting the glass with sugar instead.  I often get a bit lazy and just squirt in a bit (maybe 1/4 oz) of simple syrup instead.  Not quite as sophisticated but it works pretty well if you’re introducing a bunch of people to the drink at a party.

I could go on and on about Sidecars — so I think I will.  It goes without saying by now that you HAVE to use fresh squeezed (as in squeezed yourself) lemon juice.  Anything less in this drink and you’ll wonder why I bothered writing about it.

Secondly, the brandy you use is not as important as you think, although I will say that the more brandy you use in your Sidecar recipe the more important it becomes.  I just think that outside of Embury’s super-strong Sidecar the return on investment drops significantly over $25/bottle.  Most of the time I use a standard $15/bottle VSOP (there are a bunch of them).  Although I will admit here that I keep a bottle of Remy Martin XO on the shelf and have been known to make the odd super-Sidecar.  This (for me) is a great balance of fruit, sweet, and liquor flavors).

Lastly, a final word on ratios.  You may find that the recipe above is too tart even with the sugar on the rim.  Don’t feel bad about adding a little simple syrup to the mix.  Just know that a little goes a long ways.  Between us, my favorite ratios for a Sidecar are: 2 oz brandy, 1 oz Citronge, 3/4 oz lemon juice, ~3/8 oz simple syrup.  No sugar on rim, no garnish.  You’ll notice a similarity here to my favorite Daiquiri proportions.

What to do with Grand Marnier?  Pour it over ice and drink it.  Or a lot of other things…see the Stocking Stuffer.  We’ll cover more on that front, but that’s another post.

Having been passionate about cocktail craft for many years, I've recently been coerced into sharing my insights and experiences. This blog is my first attempt at that goal.
View all posts by Paul →
This entry was posted in Uncategorized and tagged Cointreau, curacao, Grand Marnier, Sidecar, triple sec. Bookmark the permalink.

2 Responses to Orange you Glad…