Why do burning leaves smell so good?  Wikipedia says that leaf smoke is an insecticide.  So maybe it’s inherited.  We like the smell because when we smell it we’re less likely to catch West Nile virus from a mosquito. 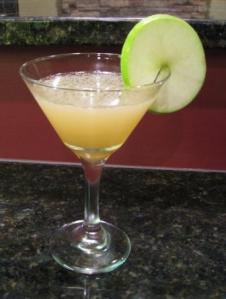 I’d rather think that it reminds us of fall days.  Pulling out your favorite sweater for the first time.  Raking and jumping in leaf piles.  Mom serving fresh-pressed apple cider.  Fresh-pressed apple cider is the shit, by the way.  If you haven’t had it you cannot be naturalized as a U.S. citizen (so I hear).  Autumn is when apples are turned to cider, and when the largest number of people become U.S. citizens.  So what better time of year to talk apples?

I know that fresh-pressed, unpasteurized apple cider is mildly risky.  There were even cases of E.coli in my home town when I was young.  But if you’re reasonably careful in your sourcing the risk is low.  Some would suggest here that you make your own.  And while that may be a fun project to do once, the title of this blog is ‘A Practical Guide to Home Bartending’.  Pressing your own cider each fall for a couple of cocktails doesn’t seem ‘practical’.

Most supermarkets these days carry a (limited) variety of unfiltered apple ciders.  At the very least they carry Simply Apple I’m sure.  And while it won’t win any awards at the local Fair, it is a decent unfiltered cider for mixing.  But this is as far down the ladder as you are allowed to go.  Under no circumstances will you use anything filtered, from concentrate or (gasp!) from a can in the freezer section for your bar.  Nothing against them in general, they just don’t have enough body to stand up to liquor.

So you’ve run the supermarket gauntlet and come home with a quality fresh-pressed apple cider.  What do you do with it?  Lots of things.  The easiest is a highball, using the standard 2:1 (or higher) ratio.  I like bourbon or rye for this — a Russell’s and cider, garnished with a cherry, is a real treat.  A dark rum like Myer’s or a brandy is also tasty.  And even Southern Comfort would work, although it’s a bit too sweet for me.  But try a few liquors and let me know what you like.

If you want to get a little more adventurous, check out the Provincial — my autumn take on a Cosmopolitan.  If you prefer your Cosmo’s a little stronger, then cut the cider to 1 oz from 1.5 oz.  And you can lessen the sweetness by cutting the simple syrup to 1/4 oz (or even less if the cider you’re using is very sweet already).  But most people who drink Cosmo’s don’t like them too strong, so start with the recipe above and you’ll be pleasantly surprised.

As a side note, if you substitute cranberry juice cocktail for the apple cider and use grenadine instead of simple syrup (it makes it more red) then you’ll have my Cosmopolitan recipe.  You can vary the cranberry (and the apple cider in the case of the Provincial) between 1 and 2 oz to make it stronger or fruitier without changing the overall character of the drink.  So play around with it and tell me where you settled.

The other thing you can do with apples is make brandy with them.  While we got it from the French, this is an American tradition that dates to the Revolutionary War.  I don’t know of any straight apple brandies that are widely available today.  But Applejack works well and is actually specified in many cocktails.  Applejack is a blend of apple brandy and straight grain spirits (vodka) – about 70 proof.  It is not Apple-flavored liqueur and it certainly is not that green Pucker shit.  You will never see those in this blog I promise you.

Some local apple brandies exist.  We have Carriage House in North Carolina and it is quite good.  Where Applejack is expectedly thin compared to a 100% apple brandy, this is full and round like a true brandy and tastes great straight.  It is about twice the cost of Applejack in my local ABC.  Probably not worth the additional cost unless you plan to drink it straight, but maybe a good gift for someone who likes cocktail craft.

You (ever-practical reader of this blog) would be better off spending $3 more for the ‘Bottled in Bond’ version of Captain Apple Jack.  It is tastier than the plain Applejack and a lot cheaper than pure apple brandy.

Pure apple brandy not only tastes good straight but makes a superior Jack Rose.  This  classic cocktail was made (more) famous by one of my favorite characters in literature.  Jake Barnes in Hemingway’s The Sun Also Rises sips one outside a Paris hotel while waiting for an always-late Lady Brett Ashley.

The Jack Rose is a derivative of the Sidecar, one of my favorite cocktails and the base formula for a whole category of drinks in my repertoire.  But you’ll have to wait for my Unified Cocktail Theory for that one.

Having been passionate about cocktail craft for many years, I've recently been coerced into sharing my insights and experiences. This blog is my first attempt at that goal.
View all posts by Paul →
This entry was posted in Uncategorized and tagged apple brandy, apple cider, applejack, Comsopolitan, Jack Rose. Bookmark the permalink.